Second golden-era tribute leak from the forthcoming mixtape “A Vintage State Of Mind”.

The New Jersey true-school icon reunites with his former Artifacts allies for this track from the forthcoming “Nu World Remix” EP.

Some head-nodding BK flavour from the mixtape “The Easy Way Out”.

We Made It – First Serve

Aby (The Bronx Boys) and Alien Ness (Mighty Zulu Kingz) discuss the place of ‘biting’ in b-boy culture on Strife.TV.

The Atlanta-based collective lift a hefty sample from one of my favourite 80s soul classics for this track from their recent album “Bruh”.

Eric B. & Rakim perform the classic “In The Ghetto” at Harlem’s legendary Apollo in 1991.

Vintage 1991 “Yo! MTV Raps” interview with the Blastmaster discussing his involvement in the “H.E.A.L.” project and other social awareness movements of the early-90s. 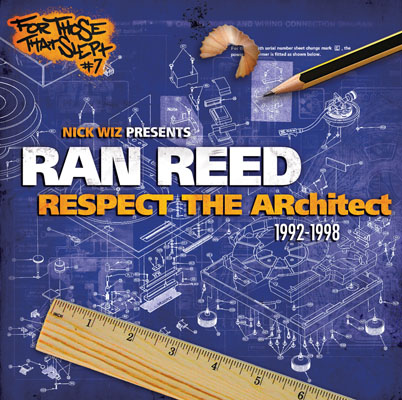 Following a twelve month period that has included releases from Celph Titled & Buckwild, Nick Wiz and O.C., James DL’s No Sleep imprint keeps the momentum going with this latest installment of the “For Those That Slept” series, a 21-track overview of unreleased material from New Jersey emcee Ran Reed largely produced by the aforementioned Wiz.

Underground heads might remember Reed from a handful of single releases in the late-90s / early-2000s on the Bronx Science label. To most listeners, Reed would have appeared to be yet another East Coast punchline professional with a tight flow looking to ride the last wave of the 90s indie explosion. But what wasn’t widely known about this particular emcee at the time was that he’d already been putting in regular work at Nick Wiz’s infamous NJ studio The Cellar for a decade, sharpening his verbal techniques whilst Wiz was also producing for high-profile artists such as Cella Dwellas, Mad Skillz and Rakim.

The fact that Ran Reed didn’t release more product throughout the 90s was definitely due to circumstance rather than the quality of the music he was making. The majority of the tracks included on this collection have aged well, which is partly due to the quality of Nick Wiz’s boom-bap beats, but can also be attributed to the fact that Reed has clearly wanted to stay in his own lane since early on in his rhyming career. Considering how much Hip-Hop changed throughout the 90s, “RESPECT THE ARchitect” could easily have contained a selection of tracks showcasing the sound of an artist attempting to jump on every bandwagon from Das EFX-style tongue-twisting to Biggie-influenced champagne raps. Yet Ran remains consistent throughout this project, delivering visual verses in his own punchy, confident style.

Titles such as “Ran Reed Representing” and references to Tommy Hilfiger, Sega Genesis and Shaquille O’Neal definitely evoke a strong sense of 90s nostalgia, but the beats and rhymes heard here are definitely worthy of their present day exposure.

Typical subject matter such as testosterone-driven exploits (“The Sexologist”) gold-digging females (“Never Knew Me Then”) and microphone prowess (“The Pro”) sits here alongside more concept-based tracks. The cautionary drug tales of “Lost Souls” are delivered over the same smooth sample heard on Extra Prolific’s 1994 single “First Sermon”, whilst the earnest “Wack Tapes” finds Reed chastising those artists whose long-players didn’t live up to the hype generated by a dope lead single (“Another ten dollars wasted on a tape that was trash, First single was a smash, That’s how you got my cash…Should’ve knew the time when The Source only gave you two mics!”).

Elsewhere, the self-explanatory and sonically hypnotic “9To5” details Ran’s frustrations with having to hold down a day job as he pursues his rap dreams, whilst UG and Phantasm of the Cella Dwellas make the trip from Medina to New Jeru to join Reed on the previously-released standout “The Introduction”, dropping animated rhymes over a pounding soundscape (“I lick a cactus and spit the thorns in your back, kid”).

Aside from a couple of unneccesary tracks “RESPECT THE ARchitect” is a worthy addition to the No Sleep catalogue, allowing true heads the opportunity to finally fully appreciate one of the golden-era’s largely undiscovered talents.

The Detriot emcee reconnects with his old crew on this posse cut from his recent album “Shotgun & Sleek Rifle”.