Normal blogging service will resume in the New Year.

“Eric B. Is President”

Day Twenty-One of “Month Of Madness” – Produced by Sapp.

There’s almost something poetic about the fact that, some six years after he foreshadowed Nas’s claims of hip-hop being dead during an interview with The Source, golden-era icon Q-Tip has dropped an album that’s restored the faith of many who were starting to believe such a statement could actually be true. By the time this sees print, The Renaissance will no doubt be sitting in its rightful place at the top of many blog / magazine / website best-of-2008 lists. A glowing achievement for the Queens, New York MC whose impact on the world of hip-hop has influenced a plethora of artists over the years, from Common, Mos Def and Talib Kweli, to Andre 3000, Kanye West and Lupe Fiasco.

It’s hard to believe that it’s been 20 years since a teenage Jonathan ‘Q-Tip’ Davis made his debut on the Jungle Brother’s afrocentric ‘Black Is Black’ from the group’s Straight Out The Jungle album. With Tip being joined by childhood friends Phife, Ali Shaheed Muhammad and Jarobi, A Tribe Called Quest added yet another dimension to the Native Tongues collective, a loose crew of like-minded artists that included De La Soul, the aforementioned JBs, and Queen Latifah. Offsetting the hardcore stance of fellow East Coast acts such as LL Cool J and Public Enemy, as well as offering an eclectic alternative to the growing gangsta rap scene of the West Coast, Tribe and the Native Tongues shattered many of the stereotypes surrounding hip-hop at the time, proving that you could catch the imagination of rap fanatics without resorting to macho posturing or shock tactics. In other words, it was cool to just be yourself.

Tribe’s debut album, 1990’s People’s Instinctive Travels And The Paths Of Rhythm, effortlessly displayed the group’s unique take on the music and culture of hip-hop. Buzzing with youthful energy, the project was an infectious mix of simple-but-funky loops, laced with quirky rhymes about everything from safe sex and healthy eating, to the art of moving butts and a lost wallet. Quest’s sound would become more refined on 1991’s The Low End Theory, an album that almost single-handedly defined the East Coast’s jazzy boom-bap aesthetic of the early-‘90s, before their third album, Midnight Marauders, took the group’s search for the perfect beat to even greater heights of sampling sophistication, resulting in what many fans consider to be ATCQ’s greatest work.

Yet whilst some elements of Tribe changed over time (Phife’s improved rhyming abilities, the now-you-see-him-now-you-don’t Jarobi, the production input of a then relatively unknown J Dilla on Quest’s last two albums), one essential factor remained consistent – the lyrical skill and immediately recognisable voice of Q-Tip. Whether speaking on the ills of the music industry (‘Show Business’), debating the semantics of language (‘Sucka Nigga’), or simply just dismissing the competition (‘Phony Rappers’), Tip’s bouncy blend of playful b-boy bravado, life lessons and humorous wit birthed some of the most memorable lines ever committed to wax, tape or compact disc. Let’s also not forget Tip’s impressive production prowess, with his work behind the boards gracing such seminal albums as Nas’s Illmatic and Mobb Deep’s The Infamous.

Following the shock 1998 break-up of Tribe, many will remember the widespread indifference that greeted Tip’s first solo effort Amplified upon its release a year later. In hindsight, it could be said that Amplified was released too soon after the group’s split for fans not to have expected anything other than the trademark Quest sound from a solo Q-Tip. The album’s main producer, the late J Dilla, had still yet to fully establish his soulful, space-age vibe which formed much of the sonic backbone of Amplified. Although Dilla’s groundbreaking production style would go on to gain a cult following in subsequent years, on Amplified at least, some considered the clean, polished sound to be too far removed from the dusty-fingered flavour of classic Tribe, a criticism previously levelled at the group’s final album The Love Movement, which also included assistance from the Slum Village maestro (an irony not lost on fans who’d enjoyed both albums at the time of release only to see those who heavily criticised the projects suddenly changing their tune following an outpouring of praise for Dilla’s work after his tragic 2006 death).

All of which (Tip’s more recent shelved solo projects notwithstanding) brings us to the triumph that is the aptly-titled The Renaissance. One of the project’s most impressive qualities is the way in which Tip has avoided pandering solely to die-hard Tribe fans by recording an album that wallows in golden-age nostalgia, yet neither has he done anything here that feels like it was made purely to reel in today’s new generation of internet-reliant rap fans.

Instead, what Tip has done is succeeded in crafting an album that draws on the spirit of hip-hop’s past, whilst keeping one eye firmly on the future of the music. In essence, The Renaissance genuinely bridges the gap between those older heads who still bump Brand Nubian’s first album on a regular basis, and younger kids obsessed with blog-savvy rappers such as Mickey Factz and Charles Hamilton.

Entirely self-produced (apart from two Dilla joints), The Renaissance finds Q-Tip reminding us of everything that is good about hip-hop by putting the soul back into a music that in recent years has become far too self-conscious, negative, and ultimately, hollow. From the breezy pianos of ‘Gettin’ Up’ (‘Bonita Applebum’ for the new millennium?), to the Jackson Five-sampling disco funk of ‘Move’, Tip consistently delivers life-affirming beats and rhymes. Even when addressing serious issues such as the war on terrorism (the Raphael Saadiq-assisted ‘We Fight / We Love’) and the downside of relationships (‘You’), The Abstract still manages to inject his verses with a sense of hope and optimism.

One of the album’s most poignant moments comes during the intro to ‘Dance On Glass’. Rhyming acappella, Tip drops bombs on the modern-day hip-hop industry, targeting desperate labels, fake thugs and “corny rap style niggas”, before stating that he’s always been confident enough as an artist to remain true to his creative vision without being swayed by popular trends.

As inspiring as it is entertaining, The Renaissance is a brilliant piece of work from a legend who still wants to play his part in pushing hip-hop forward towards a brighter day. Can Q-Tip still kick it? Yes, he most definitely can. 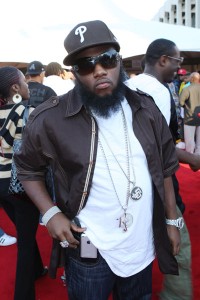 Day Twenty of “Month Of Madness” – Produced by Needlz.

Move The Crowd (Part One) – Rakim

Footage of Rakim at the last ever show to be held at NYC’s Knitting Factory venue.

Bonus Clip: Rakim talks about the growth of Hip-Hop culture.

More comedy from Big Tim as he takes us on a guided tour of his walk-in wardrobe.

In the final part of his JumpOff.TV interview Saigon speaks on his future career plans and his involvement in non-profit community work.

DJ Premier on the beats.

Taken from the NY emcee’s forthcoming EP “Look What I Can Do”.

Blog favourite Mickey Factz and the Blastmaster drop some lyrics.

9th Wonder-produced single from Comanche’s forthcoming album “Die In Your Lap” due out February 2009.

Day Eighteen of “Month Of Madness” – Produced by The Alchemist.

Saigon speaks on the auto-tune trend, blogging and the fate of his album “The Greatest Story Never Told”.

Taken from the duo’s forthcoming project “The Ballot Or The Bullet”.

Day Seventeen of “Month Of Madness” – Produced by Dominic McFadden.

Trailer for Grandmaster Flash’s forthcoming album “The Bridge” due out early next year.

Mega Montana talks about the future of Queensbridge rap after a show in Toronto.

Speak Ya Piece (Part One) – Saigon

Saigon talks to JumpOff.TV about his failed deal with Atlantic Records and the influence of Hip-Hop on today’s youth.

Dante Ross catches up with Souls Of Mischief at NYC’s Knitting Factory and discusses the crew’s first trip to the Rotten Apple back in the early-90s.