Some summer music to ride to from the West Coast duo’s recent free album “Each Step Becomes Elevated”.

The Switzerland crew team-up with NYC’s Nutso for some punch-you-in-the-face music.

“Are you wearing the wrestling mask?”

The self-proclaimed “one-man Juice Crew” puts a Method Man instrumental to work on this latest track to be lifted from the recent “Rare Gems” mixtape.

Canada’s Eternia speaks to Brooklyn Bodega about the importance of a good live show in preparation for her upcoming appearance at 2011’s Brooklyn Hip-Hop Festival.

Who Protects Us From You? – Pete Rock / Smif-N-Wessun

Footage of last night’s Pete Rock / Smif-N-Wessun “Monumental” album launch which was rushed by NYPD who seemed to be showing little restraint in their use of force – with so much of this caught on camera someone is going to have a lot of explaining to do.

The West Coast underground vet and Cali Agents emcee makes a welcome return with this Cache-produced track from the forthcoming album “Yesterday Is Not Tomorrow” dropping September 6th. 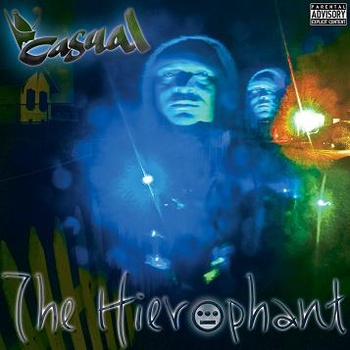 1994 was an incredible year for Hip-Hop. Nas broke out of the dungeons of rap with his classic debut “Illmatic”. Biggie dragged Hip-Hop back to NYC after a period of West Coast dominance with “Ready To Die”. Outkast smashed through listener’s preconceptions of Down South rap with “Southernplayalistic…”. Plus, the likes of O.C., Warren G, Jeru The Damaja and Method Man all dropped debut albums that each had an undeniable impact on the Hip-Hop landscape.

Yet another debut dropped during that same twelve month period which may not have achieved the sales or immediate widespread acclaim as some of those previously mentioned, but was no less revered and respected by the underground heads with a good ear for potent lyricism who embraced it. Coming out of Oakland’s multi-talented Hieroglyphics crew (Del, Souls Of Mischief etc.), Casual’s 1994 Jive-released album “Fear Itself” was a dope combination of jazzy, funk-tinged boom-bap and incredible displays of lyrical excellence with b-boy bravado and sharp wit in abundance.

Nearly two decades later and after something of an up-and-down career, the gifted West Coast wordsmith is back with this digital-only release, still laying lesser emcees to rest (which in Casual’s book is pretty much anyone else holding a microphone), but also delving into other subject matter that may also occupy the mind-space of a thirty-something Hip-Hop junkie.

The crisp “Mic Memorial” opens the album with Casual reasserting his rhyme superiority for anyone who thinks time may have blunted his lyrical sword. Over sharp handclaps and dramatic string stabs the Hiero emcee drops killer punchlines and boastful metaphors with cool, calculated ease (“I have to squeeze big lyrics in microphones, I need a macrophone, Your tour’s like an Apple phone, Sixteen gigs for three gs? You should’ve stayed back at home”).

The self-explanatory “Fiend For Hip-Hop” has a dusty, basement feel to it, with Casual’s battle-ready rhymes sitting tightly over chopped “Impeach The President” drums, funky guitar licks and a well-placed Nas vocal sample. Built around the same melodic Don Blackman loop immortalised on L Da Headtoucha’s 90s classic “Too Complex”, the Pep Love-assisted “Take The Time” encourages listeners to shun negative energy in our lives by expressing emotions, avoiding unneccesary conflict and seeking knowledge of self.

This theme is continued further over the live instrumentation of “Where Do I Go”, as Casual stresses the need to “find the power in you” and gain “spiritual enlightment” in order to survive in a world dominated by materialism and war.

Not wanting to dwell too much on global ills, however, Smash Rockwell goes back to his Oakland roots on the smooth “Sunday’s Best”. Boasting a Willie Hutch soundtrack sample from Oaktown movie classic “The Mack” and featuring a slick vocal hook, Casual uses the sun-splashed track to lay his OG hand down with a combination of cocky boasts and life observations.

With the exception of one cut (the sub-par “Shrimp Fried Rice”), “The Hierophant” is entirely produced by DJ Toure who does a solid job of providing Casual with a varied but satisfying selection of beats. Although clearly grounded in the traditional bass-heavy West Coast sound, Toure’s knack for lacing his tracks with old-school samples and atmospheric instrumentation gives the music here a soulful fluidity that compliments Casual’s many rhyme schemes. Only with the the African tribe vibes of “Bombs” does Toure’s production not really connect with Rockwell’s rhymes, with the end result sounding cluttered, disjointed and ultimately out of place.

Overall, “The Hierophant” is a welcome return from Casual. The self-proclaimed “West Coast champion” still clearly has a passion for the art of lyricism and a competitive edge that hasn’t diminished with age. A former student of the game who can claim to be a master, Casual is still as raw as he always thought he was.

Taken from the album “Monumental”.

Where Do We Go From Here? EPK – G. Huff & Vice Souletric Beats

EPK for the Ohio-based duo’s forthcoming album “Where Do We Go From Here?” which features Guilty Simpson, Ruste Juxx, Buff 1 and REKS.

The Illadelph emcee flips a classic Jeru The Damaja beat for this latest video from his recent “Throwbakk Jakk Pt. 2” project.