I’ve said it before in reviews and I’ll say it again here; producer-based albums can often be hit-and-miss affairs. Talented beat wizards can sometimes be let down by their choice of guest artists, whilst on the flipside, competent producers can find themselves overshadowed by their chosen collaborators, with their soundscapes not necessarily strong enough in musical personality to give an album the solid sonic backbone and direction it needs to stand above the competition. Either way, the end result can be a disjointed collection of tracks which feels like an uneven compilation, rather than a cohesive body of work.

In the case of “Control Your Own” from Ras Beats, the NY-based producer has avoided both of the above mentioned pitfalls. The list of featured artists on the project is impressive, ranging from golden-era legends to more recent rhyme animals, whilst Ras ensures his brand of sample-heavy production holds the album together with a sense of both confidence and individuality.

Having already gained attention as a lead single, the Roc Marciano-assisted “Wit No Pressure” sets things off as the opening track here, with the Strong Island representative dropping typically vivid verses over punchy drums and atmospheric samples, lacing his smooth-but-deadly rhymes with references to everyone from Hugh Hefner and Malcolm X to 50 Cent.

The short-but-effective “Shoebox” finds JBiz reminiscing on when he used to  “want to be the next Chi-Ali” as he sifts through back-in-the-day memories of boom-boxes, listening to Tribe and watching Video Music Box, whilst the crashing drums and emotive vocal sample of the previously-released “Let It Be” provide the perfect backdrop for Brooklyn veteran Masta Ace to demonstrate that true skills really are timeless (“And this a different year, This ain’t ’88, I’m not defined by a time, That’s what made me great…”).

The hypnotic O.C. / Elzhi collabo “Knowledge Of Self” is definitely a standout, with the pair wrapping poignant life observations around soothing strings and a well-placed Rakim vocal snippet, displaying a natural chemistry that ensures the cut has an organic feel to it, rather than simply sounding like two seemingly unconnected emcees being pushed together for the sake of trying to make a tracklist more interesting.

Ras also pays homage to the galaxy of Queens on an instrumental effort named after his home borough, mixing the drama of a 70s blaxploitation soundtrack with a nod to the East Coast flavour of the 90s, whilst one of the game’s most recognisable voices Sadat X embraces his OG status on “Survive” (also previously-released), schooling today’s new generation of rappers from a place of genuine experience  over dusty beats and melodic samples.

Closing the album is the melancholy “God Bless”, which features JBiz and DITC’s A.G. digging deep to deliver heartfelt rhymes about personal loss, with the musical partner of Showbiz really rising to the challenge via an emotionally-charged verse about his late father (“Your face can’t be replaced by time, You’ll forever be branded on my mind, I shed a tear with the ink pen, So I’ma make him proud while I’m here, That’s what I’m thinkin’…).

Further appearances from the likes of Blacastan, Rasheed Chappell and Sureshot La Rock add even more verbal weight to the album.

Overall, “Control Your Own” is a strong outing from Ras Beats, a gifted producer who clearly wants to add on to the legacy of traditional New York boom-bap rather than simply trying to recreate what has come before him.

“Control Your Own” drops here on July 19th. 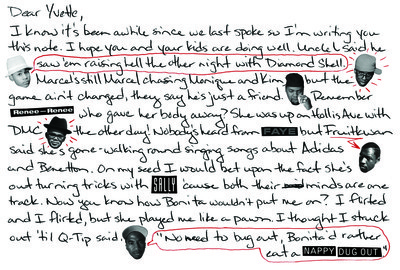 Snippet of the exclusive remix of this nostalgia-driven track which will form part of Slice-Of-Spice’s special vinyl collectors release of DJ Format’s recent album “Statement Of Intent”. 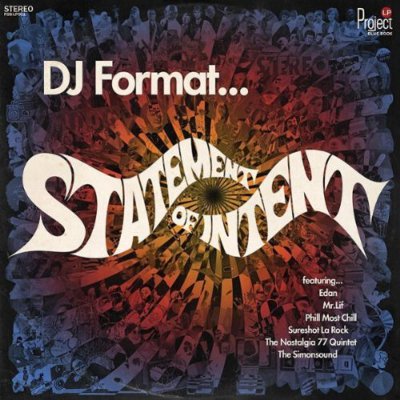 It’s been nearly a decade since the release of UK vinyl junkie DJ Format’s 2003 debut album “Music For The Mature B-Boy” and seven years since its follow-up, 2005’s “If You Can’t Join ‘Em…Beat ‘Em”. Since then the Brighton-based producer’s presence on wax has been fairly limited, with Format becoming known more for his party-rocking live deejay sets and mixes than his own musical output. But, as its title suggests, with this third album the dedicated crate-digger returns to remind listeners of his capabilities behind the boards with what appears to be a renewed sense of vigour.

To these ears, “Statement Of Intent” showcases the work of a rejuvenated Format. It’s not that any of the tracks included here are a million miles away from the producer’s trademark mix of obscure samples, deft cuts and hand-picked underground lyricists, but there does seem to be a grittier, more aggressive feel to this project in places compared to Format’s past work, as if he really felt he had something to prove this time around (perhaps to himself more than others). If so, that sense of purpose and determination has definitely led to some positive results in the studio.

Having worked closely on previous releases with Canada’s Abdominal, this time around it’s Washington D.C.-raised Diggers With Gratitude emcee Sureshot La Rock who maintains a constant and welcome presence throughout “Statement Of Intent”. The opening title track finds the talented wordsmith giving props to some of the pair’s shared old-school influences, name-checking the likes of Melle Mel and Grandmaster Caz over expertly chopped beats and a variety of fast-moving samples. Whilst on the Levi 167-sampling “Dope Pusher”, La Rock peppers the track’s dense soundscape with cocky, larger-than-life boasts.

The relentless “Spaceship Earth” features Boston’s Edan travelling at magnificent speeds around the universe, dropping a rapid multi-syllable flow that would make Big Daddy Kane smile over rattling drums and whip-lashing psychedelic guitar (“Starting a colony deep in the galaxy must be the aim of astronomy, Crooked economy killing ecology”).

On the instrumental side, the dusty vibes, old-school chants and free-flowing funk of “Beyond Disco” (co-produced by The Simonsound) evokes the eclectic feel of mixes heard on Afrika Islam’s NY-based early-80s “Zulu Beat” radio show, whilst the brilliant “Battle Of The Planets” brings back memories of the electro era, with Format taking to the vocoder to issue dance-friendly instructions over rolling drums, melodic synths and space-age sound effects (“The whole galaxy is watching, This is a universal jam….Interplanetary b-boys I know you came to throw down”).

Another stand-out is the humorous “Remember…” which features Sureshot La Rock cleverly paying homage to the various females who’ve been immortalised on wax by the likes of Just-Ice, Stetsasonic and UTFO over dreamy chimes and mellow guitar (“The other day I took a stroll down memory lane, Erick and Parrish were makin’ dollars pimpin’ out Jane, You shoulda seen her kickin’ game, I tried not to stare but, It’s been twenty years with that Anita Baker haircut!”).

With further input from Mr. Lif, Phill Most Chill and The Nostalgia 77 Quintet, “Statement Of Intent” covers a lot of musical ground, from true-school breakbeat-driven anthems (“Live At The Place To Be”) to full-blown jazz (“The Long Goodbye”), but Format consistently hits the target regardless of where his musical inspiration is coming from.

In my opinion, “Statement Of Intent” contains DJ Format’s best work to date, mixing his experimental tendencies and love of Hip-Hop with a new sense of urgency and sonic vitality. As far as statements go, this particular one is hard to refute.