On the 25th anniversary of his classic debut album release “The Sun Rises In The East”, Gang Starr Foundation legend Jeru The Damaja drops some thought-provoking social commentary. 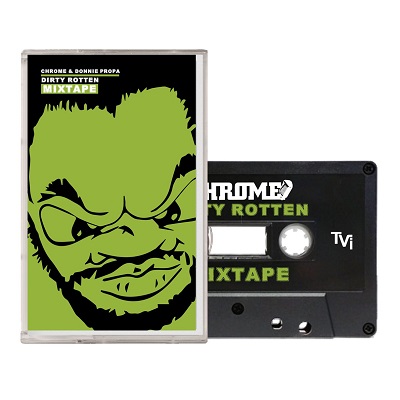 Stalwarts of the UK Hip-Hop scene Chrome (of Def Tex fame) and Donnie Propa (Heavy Links) pay tribute to Brooklyn’s mighty Jeru The Damaja with this dope collection of “classics and hidden gems” from the Gang Starr Foundation member – available to purchase on cassette via Village Live here.

The veteran Brooklyn emcee takes to the streets of London in this short video for his new single produced by Poland’s O.S.T.R.

New visuals for a Junkyard JuJu-produced cut off Jeru’s 2014 project “The Hammer”.

Brooklyn’s mighty Jeru The Damaja has teamed-up with Slice Of Spice for a vinyl-only release of his early-90s Guru-produced demo tape.

Just One Record – Jeru The Damaja

Jeru The Damaja explains why Slick Rick’s classic 1988 debut “The Great Adventures Of…” remains one of his all-time favourite albums.

DJ Cutler of Buffalo, NY’s Pseudo Intellectuals takes a trip down memory lane to explore the breaks and samples behind music released during 1994 from the likes of Nas, Kurious, Odd Squad and many more.

1994 interview with Brooklyn’s Jeru The Damaja on “Yo! MTV Raps” discussing the importance of lyrical substance and problems with Hip-Hop journalists. 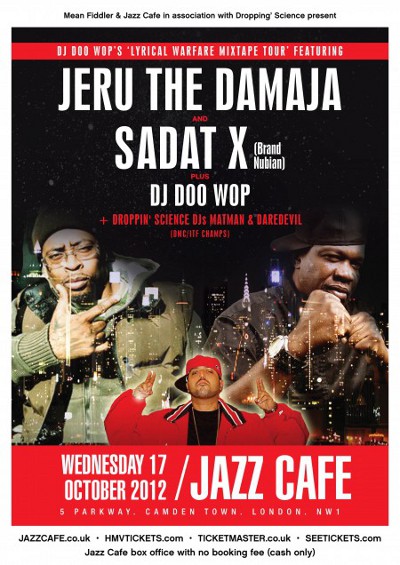 London has seen its fair share of performances from golden-era artists in recent months, with this particular event being one of the most anticipated, promising appearances from not one, but two iconic emcees backed-up by one of the greatest mixtape deejays of all-time.

Between them, Brand Nubian’s Sadat X and former Gang Starr Foundation member Jeru The Damaja share a hefty catalogue of classics, all of which have aged well and still stand as musical monuments to the lyrical brilliance and sonic creativity that the best of 90s Hip-Hop had to offer.

After the Bounce Master himself DJ Doo Wop had warmed the crowd up with a selection of real rap staples, a lively Sadat X bounded onstage to the sound of the Brand Nubian favourite “Punks Jump Up To Get Beat Down”, leading the crowd as they chanted the hook in unison before launching into the timeless “All For One”.

Pausing to remind everyone that he reps “New York City, Brand Nubian, D.I.T.C. and Lo-Lifes”, the emcee with one of the most recognisable voices in Hip-Hop proceeded to drop his verse from the late-90s Rawkus banger “1-9-9-9” and also delivered a rousing rendition of his “Ready To Die”-era collaboration with Biggie Smalls, “Come On Motherf**kers”, with Sadat reminiscing on the time he spent in the studio writing the track with the BK giant as they both got drunk on champagne.

Promising to return later, X left the stage, leaving the audience in the capable hands of Doo Wop once again. Dropping some rhymes of his own, the Bounce Squad leader took the opportunity to dedicate the segment to his fallen friend Guru (complete with a “F**k Solar!” moment), going back-to-back on the turntables with some Gang Starr classics, including “Take It Personal”, which was Jeru’s signal to make his first appearance.

Reciting Guru’s rhymes in his own inimitable Brooklyn baritone, the NY emcee, decked in jeans, hoodie and Timberlands, smiled widely as he was greeted with roars of approval. Working his way through a number of DJ Premier-produced cuts, including “D. Original” and “Tha Bulls**t”, the gritty wordsmith mixed some humour into his performance, engaging in light-hearted exchanges with various audience members and playfully chastising the crowd for apparently not making enough noise.

Something that was apparent from looking around the venue was the number of younger heads in attendance, some of whom looked like they would barely have been born when both Sadat and Jeru were first making their respective marks on the Hip-Hop landscape. Encouragingly, the majority of the more youthful faces around the Jazz Cafe definitely didn’t appear to be fairweather fans, rhyming along word-for-word to twenty-year-old joints as if they were the soundtrack of the present day. A situation which can only be viewed as a positive thing as, judging from the lack of old-school heads at this and other recent gigs, it will be those younger fans who keep artists such as Sadat and Jeru touring for years to come, as long as their interest in classic Hip-Hop isn’t just a passing phase based on the music’s potential retro-cool appeal.

With Sadat and Jeru each performing a second individual set, which included anthems such as “Love Me Or Leave Me Alone” and “Come Clean”, the show closed with an impromptu freestyle session. As Jeru stepped behind the turntables to spin some familiar breaks, Sadat and Doo Wop invited any emcees in the house to approach the stage, with UK talent such as Oliver Sudden and Chima Anya taking the opportunity to rock with the three Rotten Apple representatives.

Ending a seamless night of classic material by mingling with fans to graciously sign autographs and take photos, Sadat, Jeru and Doo Wop left having ensured those older fans in the crowd were able to relive some of their Hip-Hop memories, whilst helping the younger heads in the audience create some new ones of their own.

Footage of Sadat X performing “Punks Jump Up To Get Beat Down” at the Jazz Cafe.

Extensive Jeru The Damaja interview with veteran journalist Davey D covering the former Gang Starr Foundation emcee’s thoughts on the growth of Hip-Hop culture, his friendship with Guru and the new album he just recorded in Poland – some jewels are dropped throughout.

Former Jeru The Damaja affiliate Afu-Ra looks back over his career as he prepares for the release of his new album “Body Of The Life Force Part 2”.

The Illadelph emcee flips a classic Jeru The Damaja beat for this latest video from his recent “Throwbakk Jakk Pt. 2” project.